Poses for Your Hips

Why Do You Teach Yoga?

Create Space in Your Hips Through Strength & Stability 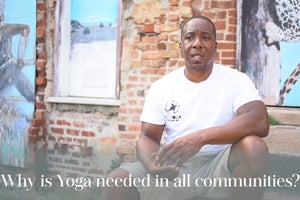 Why is Yoga Needed in All Communities?
Poses for Your Hips

Why Do You Teach Yoga?

Create a personalized feed and bookmark your favorites.

Create a personalized feed and bookmark your favorites.

Get full access to Outside Learn, our online education hub featuring in-depth yoga, fitness, & nutrition courses, when you sign up for Outside+.

Marshawn Feltus was just 17 years old when he got into a street altercation in one of Chicago’s most violent neighborhoods and shot—and killed—another young man.

He was sentenced to 38 years in state prison and while incarcerated, he was talked into trying yoga. He reluctantly rolled out a bath towel (they didn’t have yoga mats) in an old chapel space, and within five minutes of that first practice, he was hooked.

Over time, he began teaching in prison. And after serving 18 years of his sentence, Feltus was released. He returned to Chicago with a new purpose: to bring the healing power of yoga to his community. He completed a local entrepreneurship program and a 200-hour yoga teacher training at Chicago Yoga Center. Then, he founded ACT Yoga—which stands for Awareness, Change, Triumph (an acronym he used in prison to encourage other inmates to enroll in the GED, college, and self-help programs).

Here’s what teaching yoga means to him. After you watch, tell us: Why do you teach yoga? Join the conversation by posting a picture or video to your Instagram and use #yjconversations.